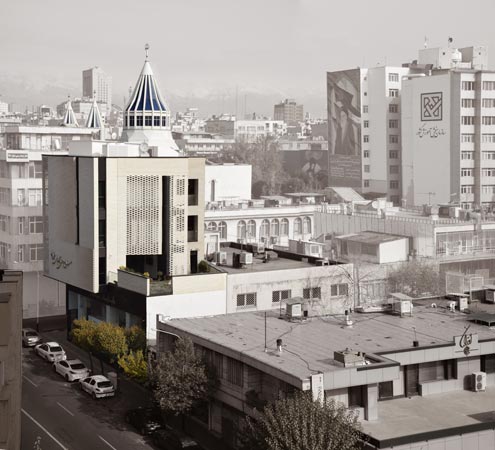 The aim of this project was to design the center for Isfahan’s handcrafts, which is to be built along Tehran’s Passage of Handcrafts. With a total area of 197 square meters containing commercial, administrative, and residential use, the building is located adjacent to Saint Sarkis Church in Nejatollahi Street, a busy downtown district in the city of Tehran.
Design Origins
considering the Saint Sarkis Church and other notable buildings in the neighboring context, and taking into account the client’s wish to make the optimum use of space, we decided to look for simplicity and purity of form in the design. Using bricks and brick embellishments as façade material- It is clear that decorations and embellishments have had a significant history in Iran’s architecture. These embellishments which often took abstract forms -as a result of cultural and religious beliefs, have an exulting presence by creating aesthetic aspects and thus, cannot be considered a mere superficial decoration, but rather, a unifying complementary element. Decorating elements such as Khatam (Signet), Hachure, Turquoise, and brick, etc. in Iran’s crafts and architecture stand as a testimony to this statement. This interpretation in sense of semantics and aesthetics guided us to use brick embellishments as a complementary element to the pure form of the building which was itself a result of the project’s needs and constrains. Although aesthetics of the form and its proper relation to the function is of great importance by itself, the role of embellishments in the history of architecture cannot be neglected.
Guidelines
Taking into account the above-mentioned factors, as well as the diversity of use (commercial, office and residential) and plan types, our guidelines included vertical continuity of fenestrations, double façade in the south, and permeable brick window covers (Fakhr-o-Madins). Thus, natural light was maximized in spaces, without losing the purity of form on the outside. Given that the residences are located at the heart of office-commercial context of the site, the permeable façade also made the interiors private as well as keeping the building’s façade visually “quiet”, while providing a sense of place and corresponding with climate concerns. Furthermore, the differently angled brick rows on the façade which start at zero and raise in angle to reach the highest level by the edge of the windows create shade and light patterns and make the façade dynamic while keeping balance, rhythm and movement. These brick tides on the façade emphasize the light and shadow near fenestrations and Fakhr-o-Madins, as if shade and light on the outside, find its counterpart on the inside. This consistency of brick which is integrated with purity, simplicity and tranquility of the form, brings one to wonder about the meaning behind the design: the harmony between architecture and crafts with the aim of creating beauty on one hand, and integrity of the form, use, shape and concept on the other